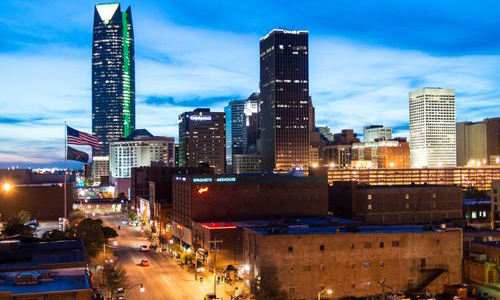 Oklahoma City is the focus of a new study that will take a close look at its emerging innovation district and offer ways to turn it into a destination center where collaboration and innovation can flourish, those who attended the recent Greater OKC Chamber board retreat learned.

In return, such a place leads to economic growth and boosts the city’s ability to attract college graduates and entrepreneurs. The area that encompasses the Oklahoma Health Center and Automobile Alley is prime for such a transformation.

The Brookings Institution and the Project for Public Spaces (PPS) are conducting this 18-month study, and the daylong board retreat focused exclusively on what this could mean for Oklahoma City.

In the first keynote session at the retreat, Bruce Katz, vice president of the Brookings Institution, and founding director of the Metropolitan Policy Program, addressed innovation districts, noting that this type of district is a geographic area where big institutions and companies cluster and then connect with small firms, startups, business incubators and accelerators.

They are “physically compact, transit-accessible and technically wired; they offer mixed-use housing, office and retail,” he added. They also are walkable and bikeable – “‘competitive places and cool spaces,” he said.

Barcelona, Spain, was the first to define this.

Katz said innovation districts can spring up according to several models:

The “anchor-plus” model, centered around research and medical centers.

Urbanized science parks, which are away from the city core.

Re-imagined urban areas, which are districts that are within or near waterfronts or other old industrial areas.

“All of these districts have the same kind of common elements that sort of mash up together,” Katz said. “It’s really economic, physical and networking assets that come together to create essentially an ecosystem.”

The rise of an innovation economy

Manufacturing districts in the late 19th century and early 20th century relied on proximity to each other. Around World War II was the rise of research and science parks, driven in part by defense needs and the Cold War. These were built away from the city core. Along the way, Europe and the United States built a lot of freeways that tended to divide parts of cities from themselves.

Now all of that is changing as the world sees the rise of an innovative economy, particularly around research universities and medical districts.

In Oklahoma City, Katz said that the innovation district as it is currently defined has “good bones” with its bioscience/medical center focus of the Oklahoma Health Center, the GE Global Research Oil and Gas Technology Center, Oklahoma School of Science and Mathematics and Automobile Alley. Even though a highway separates part of the district, from an urbanist perspective, Katz said, this looked like one “continuously integrated area.”

“In most places in the country, you have to manufacture it. Here you have it,” Katz said. The area “wasn’t built to be a 21st century innovation district, but it’s got the ability to be one.”

The boundaries are not set and can be porous depending upon development, but they are defined for the purposes of this study by Brookings and PPS. This will allow them to measure and track progress, collect data and compare the area pre- and post-development.

Oklahoma City has 1.28 million residents and $72.6 billion in economic output, placing it 44th out of the top 100 metro areas, according to a Brookings slide show presented at the board retreat. The city’s employment growth has increased by 11.2 percent since 2010; its output growth as increased by 19.1 percent.

Getting started in Oklahoma City

The study will first help this area take stock of its networking, economic and physical assets and define what makes Oklahoma City unique compared to other places. The study also will bring together multiple stakeholders.

“You’re Oklahoma City. You’re not any of these places,” Katz said after he had named some of the other cities that have formed their own innovation districts. “You don’t want to replicate … You just want to know what folks are doing.”

Katz also said he thought that Oklahoma City will be able to deploy some of their ideas immediately, moves that in turn will spark more. Innovation districts capitalize on strong ties that already exist among people in the same fields, but they also create spaces to leverage the weaker ties between people in different fields.

“You put all that together, and you’ve got an innovation ecosystem,” he said. “You add in the risk-taking culture of the United States, and I think we’re going to be on a roll as we adjust and adapt to this new economy.”