Being equidistant from both coasts at the junction of three of the nation’s major interstate arteries, Oklahoma City’s location ensures easy travel and transportation to anywhere in the United States. Oklahoma City is the capital of the state where the Southwest, South and Midwest collide. All those cultural influences combine to make Greater Oklahoma City a unique place in both its location and its people.

Getting around the Innovation District and downtown is easy. If you’re not on the streetcar, foot or bike, but in your car, rest-assured parking is plentiful and rarely hard to find! 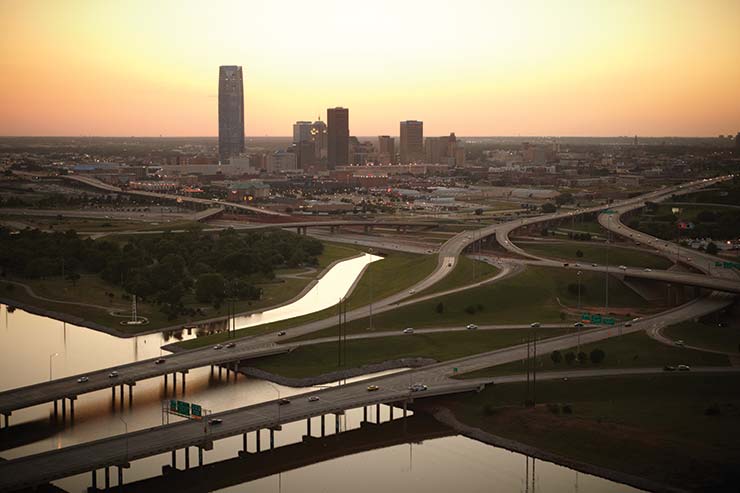 Among cities of comparable size, OKC by far has the lowest commute time in the nation.
– Census Bureau’s American Community Survey

CATCH A RIDE ON THE OKC STREETCAR

Pedestrians in the urban core to have a quick way explore the businesses, restaurants, and shops along the two streetcar loops serving Bricktown, City Center, Automobile Alley, Midtown and Arts District areas.  Getting around now is even easier!

Oklahoma City’s airport continues to grow with several recent announcements of nonstop flights, including a new connection to the nation’s capital. Southwest Airlines announced that it will be expanding its Oklahoma City service with a new nonstop flight to Ronald Reagan Washington National (DCA) from Will Rogers World Airport beginning Nov. 4, 2018.

GET TO KNOW OKC ON TWO WHEELS

Experience downtown Oklahoma City with unforgettable bike tours and rentals, offering insight into the unique history, art, architecture, craft beer and local food with Ride OKC. Ride OKC will show you We hope to show you unexpected hidden gems and have a pint with you enjoy at one of our award-winning breweries.