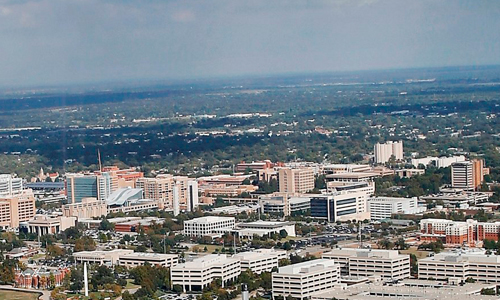 The traditional landscape of innovation for most of the 20th century was inaccessible – with major companies operating in remote office parks that were isolated from other commercial, housing or retail developments. However, the geography of innovation is returning to cities. In order to address the importance of community and connectivity to the overall concept of innovation, the Bass Initiative on Innovation and Placemaking includes the expertise of the Project for Public Spaces, an organization that helps people create and sustain public spaces that build stronger communities.

At the 2015 Greater Oklahoma City Chamber board retreat, PPS representatives Steve Davies, co-founder and executive vice president, and Meg Walker, vice president, explained the concept of placemaking to attendees and highlighted ways in which it could encourage the transfer of ideas and concepts that are so important to innovation and discovery.

Placemaking is defined as a multifaceted approach to the planning, design and management of public spaces. Community-based participation is at its center, and it capitalizes on a local community’s assets, inspiration and potential to create quality public spaces. Its concepts are rooted in the work of Jane Jacobs and William H. Whyte, which introduced groundbreaking ideas in the 1960s about designing cities for people, not just cars and shopping centers.

Davies noted that there is a natural convergence between innovation and creating a sense of community, and Oklahoma City will be the first place that PPS will focus on the synergy between both. In order to create vibrant public spaces, it is important to recognize the reasons that public spaces fail. Fear, narrow development goals and isolated disciplines all contribute to their lack of use, as do the way that areas are developed. Underused spaces are a product of project-driven planning while vibrant spaces are developed through place-driven planning. Davies explained that the Oklahoma Health Center was originally developed with project-driven planning, but the place-driven is more organic and it better captures the culture of an area and the unique attractions that it brings to a city.

The place-driven approach to planning, which key to placemaking, identifies key stakeholders of an area and uses their input alongside an evaluation of a place to create a vision for the area. The community-focused approach allows the design to support the use of the space and the vision of the community.

“When people come together with a vision, creative solutions occur,” Davies said. “You have already done this in Oklahoma City. The MAPS projects were really a place-led vision that has had a transformative effect on Oklahoma City.”

Keys to successful placemaking PPS will use its more than 40 years of placemaking experience to help Oklahoma City apply that creative place-driven approach to the innovation district, and at the board retreat Meg Walker outlined the practical tools that allow a community to transform itself. Walker said that there are four key attributes that a place needs to display before it can be considered successful.

First is an area’s sociability, which is measured in the life on its streets (especially evening use), the diversity of its neighborhoods and the volunteerism displayed within the area. Success is also indicated by access to the area, which is measured in traffic data and transit usage, and the area’s image, which is rated by its crime statistics, sanitation rating and building conditions.

Another important gauge of an area’s success is in its uses and activities. The district should have multiple attractions that entice people of all backgrounds to stay longer. As Walker put it, these activities make a district “a place you drive to instead of a place that you drive through.”

In order to develop this level of success, PPS has developed an exercise that identifies existing attractions and potential developments in a district called the Power of 10 exercise. PPS believes that a successful area will have 10 major destinations on a city level, 10 places to go in the district and 10 things to do within the district. By identifying and growing the number of attractions within an area, a district will create anchors of activity and social interaction that offer many points of interest. Diverse offerings will also allow the public to interact with commercial, cultural and educational destinations.

Existing developments can contribute to an area’s sense of place by making their buildings, specifically the ground floor and surrounding walkways, accessible and interesting to the public. Making sidewalks come alive with dining and retail options or using a ground floor area for public use all will give pedestrians the incentive to use the space more frequently. Placemaking recommendations also include encouraging pedestrians to linger with amenities, integrating the arts to enhance design and attract people, and to draw the community to an area with festivals and events. The spaces and events also must be managed actively in order to keep an area safe and well maintained.

While the recommendations for placemaking seem daunting, Walker said that the best way to get started is by choosing projects that can happen immediately. Projects that are “lighter, quicker and cheaper” will not only be easier to implement, but they will also create the momentum needed to make larger changes. Something as simple as adding chairs and lawn games to an open area, like the Harvard Common Spaces Initiative did on Harvard’s campus, can have a massive impact in a very short time.

PPS presenters concluded the presentation by laying out the steps necessary to create a placemaking movement, which is very similar to how the company will conduct its research and implementation strategies in Oklahoma City: Develop a vision, communicate that vision to stakeholders and to the public, search for impediments, organize a strong team, attack complacency, produce short-term wins, take on bigger challenges and connect change to the culture. While the concept of placemaking may be new to Oklahoma City as a whole, Davies noted that Oklahoma City is already the product of using a larger vision to create a sense of community.

“I think you are already making it happen in Oklahoma City, and I hope that this placemaking approach will have repercussions far beyond the boundaries of the innovation district,” Davies said. “These are tools that you can use in your work throughout the region.”